Meet some of the amazing humans that are the heart, soul, and hands of Nyaka. 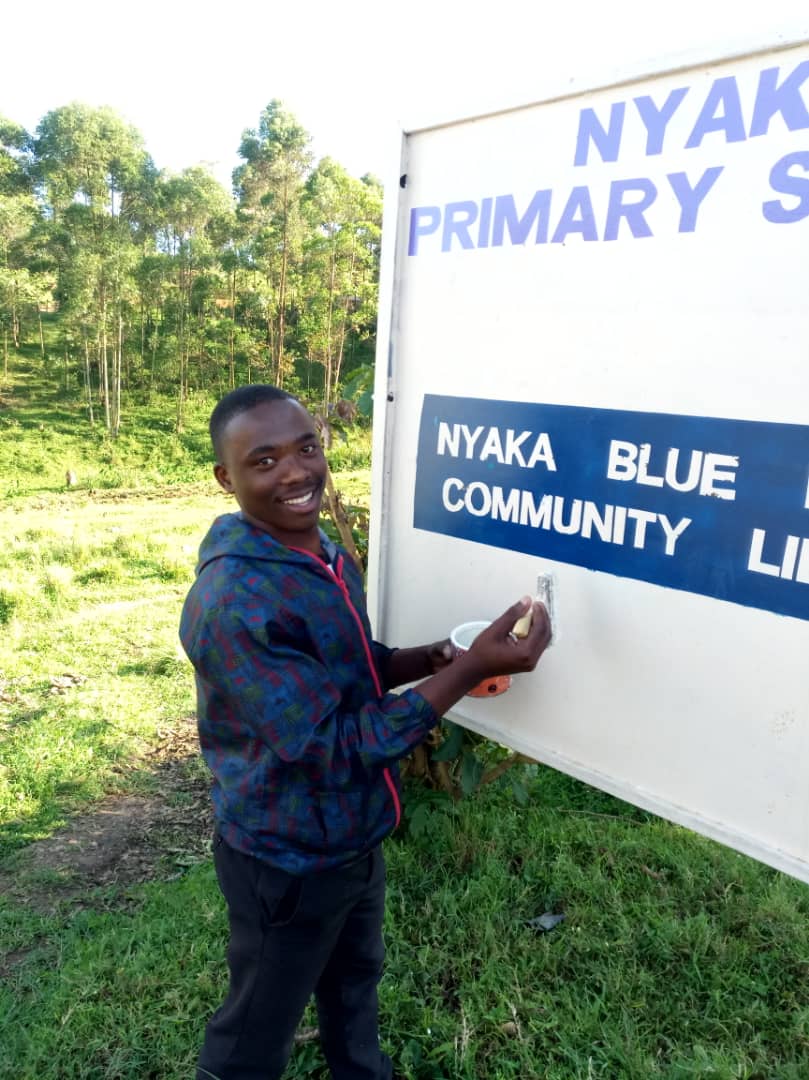 I really enjoy art. I hope when someone is describing me, they mention me as an artist first and foremost. When you are making art, it is as if you are creating real things — you’re bringing things to life. Let’s say, someone asks you to draw a portrait of them. You take your paper and pen and make something that looks just like them. I also love art because it gives me the opportunity to give back to my community. When you create something meaningful, you’re helping inspire your friends and family.

I love teaching because as I teach, I create many friends. I feel so much joy when I see the product of my work. When the students I teach succeed and have bright futures, I feel extremely proud. I started teaching in 1976 and have seen many students go on to secondary school and university. I even taught our director, Dr. Twesigye Jackson Kaguri! God favored me a lot. Naturally, I am a counselor and I’ve been lucky that the children loved me very much. 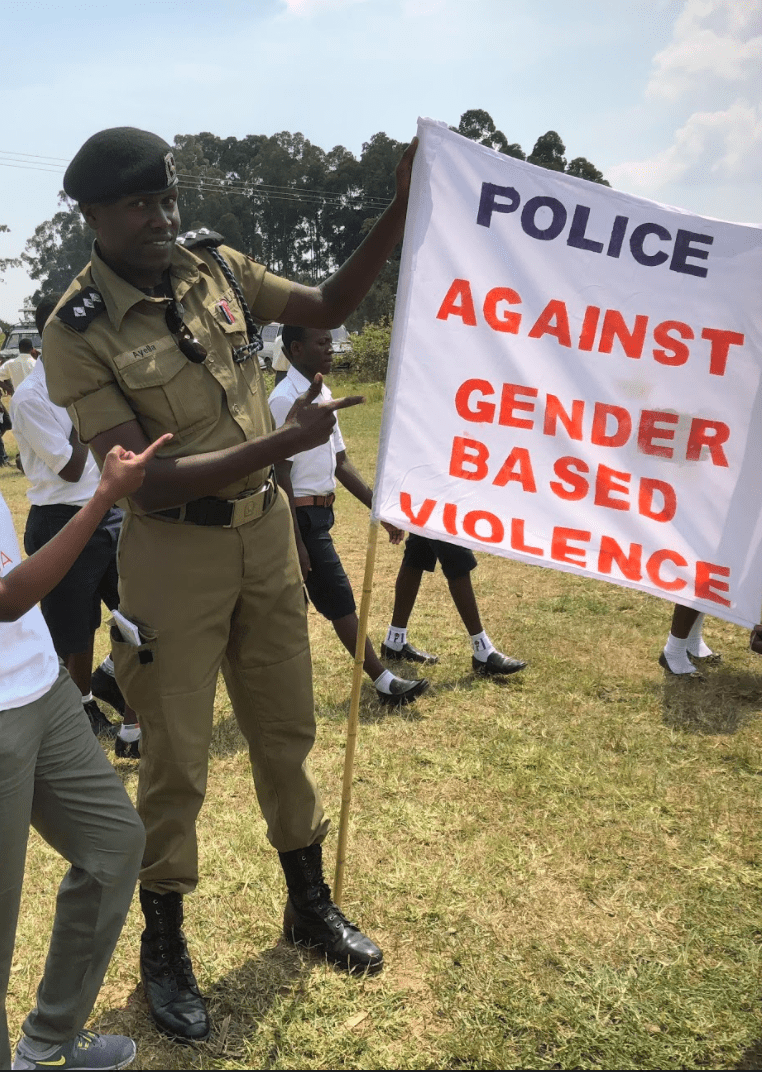 Both of my parents are police officers. My grandfather was also a police officer, so I felt that this was my rightful place. Having been a son to a police woman and police man, I have been familiar with the system for more than thirty years. I love my position and that it allows me to champion the rights of children.

Before I joined the police force I was working for Save the Children and World Vision, on child related projects. At Save the Children I helped parents whose daughters had been kidnapped by the Lord’s Resistance Army (LRA). So they came together to talk and negotiate with the LRA, to ensure that the children could be released – and we succeeded.

The girls I grew up with — none of them made it. Most got pregnant and dropped out of school or were forced to get married. I grew up in an environment where rape and defilement was common. I learned about EDJA’s mission and was so impressed – someone fighting against gender based violence? In Kanungu? That had never happened. In my experience, they always blamed the victim. They would say ‘It’s your fault,’ and there was no such thing as counseling for this trauma.

When I started serving my community, it was not easy. People even told me, ‘You will be the first to be raped.’ Those first months were horrible and I met many people with ulterior motives. But there was something in me that said ‘maybe you can do it’. People started reporting and as time went on, things changed. As we did more radio programs and community outreach, people started to understand. 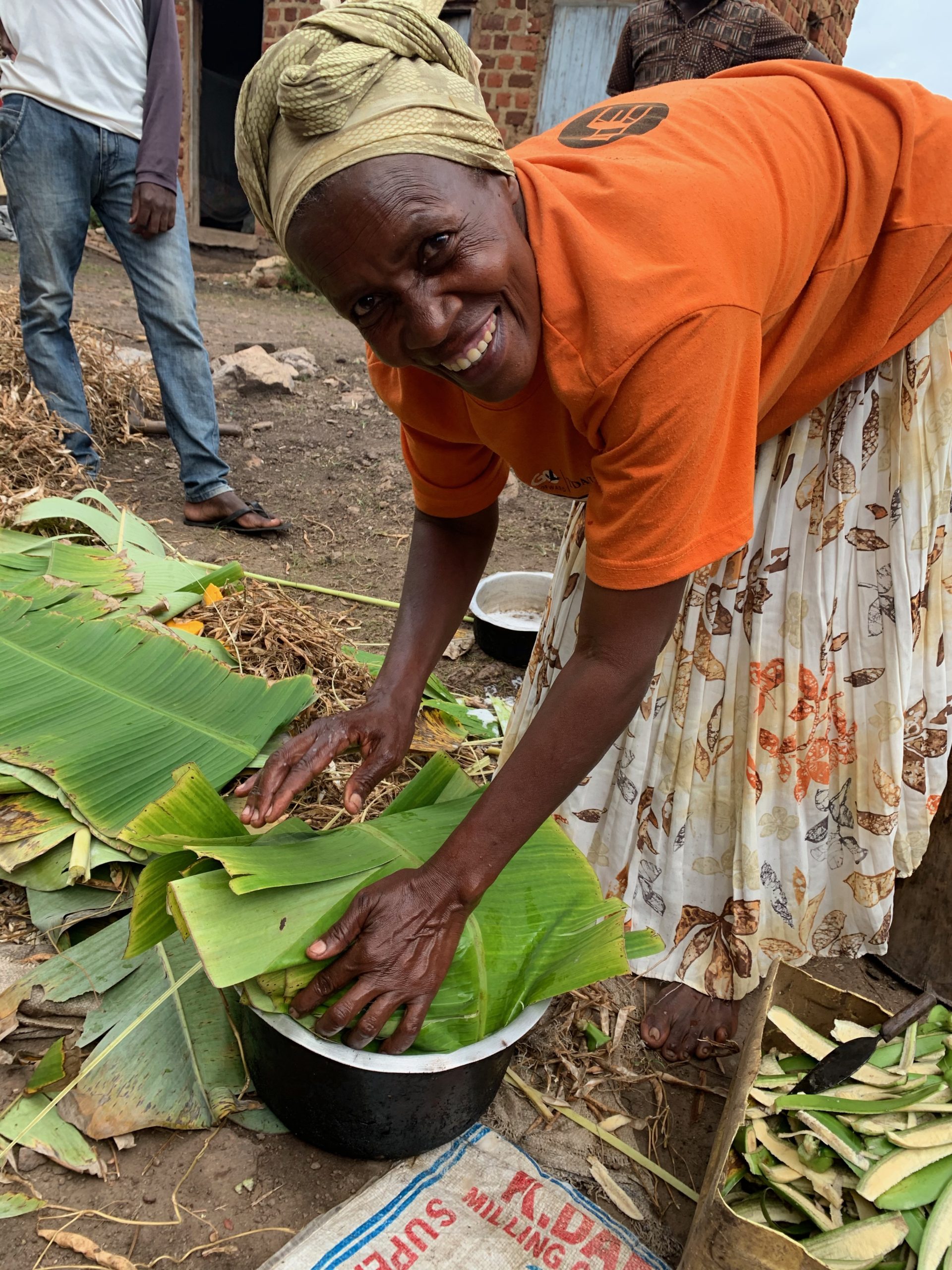 I make matooke every day. It’s very sweet and easy to make. I could eat it for every meal for an entire week and not feel sick — you can’t do that with rice or potatoes. Ugandans love matooke because we use every part of the banana plant. We use the leaves as a clean surface to prepare other foods; some people even use the banana fibers to create roofing for their homes. The leaves and husks are used to feed animals like cows and goats and children can use the fibers to make homemade footballs. We prepare matooke for ourselves, but we can also sell it to bring in extra money. It’s my favorite and I think it’s the favorite food among most Ugandans — because of all the good it does. 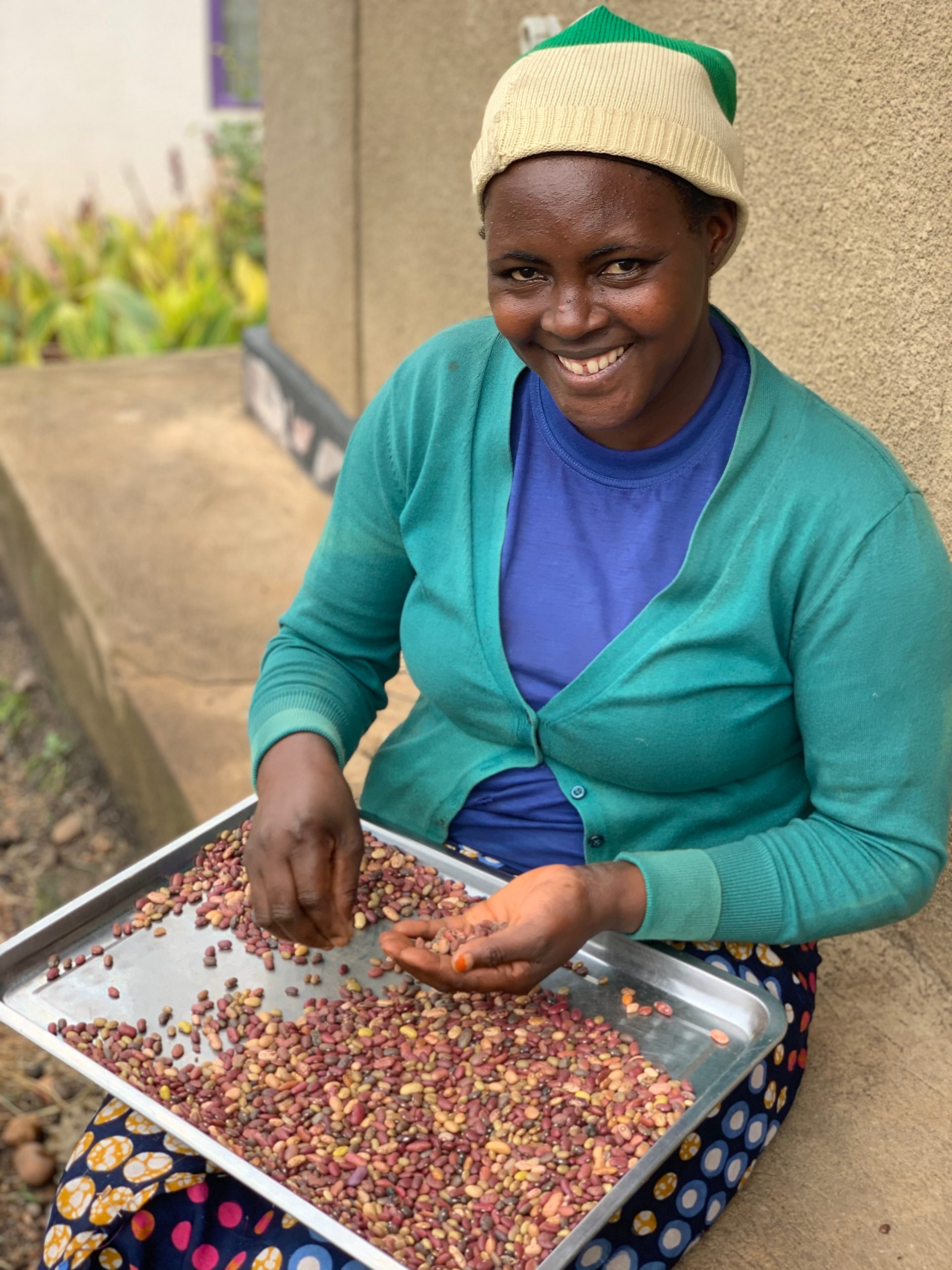 My son’s name is Bliar, He’s nine now. I had him when I was only fourteen years old and still in school. I have raised him all by myself which was extremely challenging. As his father is not in the picture, I am still at home with my brothers. I’m the youngest and am very close to them. They don’t have children of their own, but they help care for Bliar.

I’ve been working for the Nyaka guest house for three years. I love my job and meeting the people that come to stay with us. Having this job is a huge blessing, and I am so proud to be able to support myself and my family. While I enjoy working here, I ultimately would like to open my own shop and be my own boss.

When I got the offer to come and work for Nyaka, I was so excited to return home. There is nothing better than being able to give back to the community that has touched you. I strive to do my job perfectly to ensure that somebody can step where I have stepped—so that somebody else can succeed and become a vital member of the community.

I went through the entire Nyaka school system and performed well which earned me admittance to Makerere University Business School.I never thought it would be possible for me to attend university. To graduate from university—and to be doing it in Kampala, the capital—was a dream come true. As I stood there in my graduation gown, I thought, ‘Who am I to be here?’ Nyaka has done something right for me.

I am not sure how old I am exactly but I was here the last time Uganda had locusts*. I have two grandchildren — a girl and a boy — that I’ve cared for over the past eighteen years. They are now grown and they help me as I am very weak and can no longer hoe or tend to our garden.

Before I joined the Nyaka Mukaka project, I had no home. My grandchildren and I would sleep outside, seeking refuge in neighbors’ homes when it rained. People really harassed us — some even threw stones at us as we slept on verandas or other properties where we could find shelter. In 2007, Nyaka built me a big house, a kitchen, and a pit latrine. I now feel dignified; when I die, they will find me in my own home. Many members know I am too old to do my own farming so they share their harvests with me. I don’t have to worry about going hungry; I am supported and loved because I am a Nyaka granny.

*We have estimated Serena to be around 85 years old. 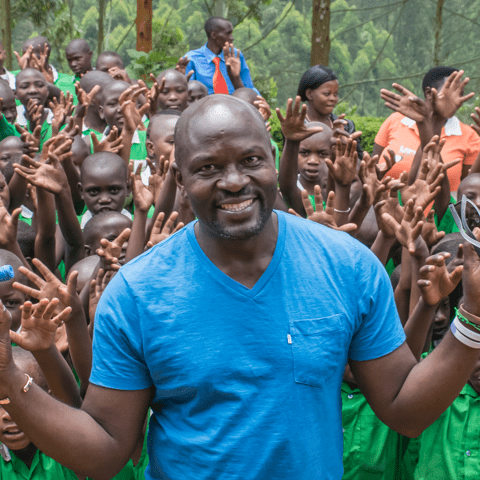 Education breaks barriers of poverty. My mother and father raised five of us but they struggled because they had no money to send us to school. My father would buy one pencil and break it into five, so each of us could have a piece. Because I had a fifth of the pencil, I ended up at Columbia University. That’s what opened my eyes. I knew what my obstacles were as a child that prevented me from getting an education.

So, in 2001 I used $5,000 meant for a house and a two room school. Nyaka has since built two primary schools and a vocational school. Orphaned children don’t have money to pay for school so we made it free. Our children get uniforms, pencils, and pens. And their pencils have erasers. I never had an eraser.

The Grandmothers’ program was started in 2006. We asked grandmothers to house students. These children have gone through traumatic experiences. We want somebody in the house who they can go to when they’re scared. So today we have 15,000 grandmothers taking care of 80,000 grandchildren*. Nyaka has taken all of those barriers and broken them down so our children can succeed. 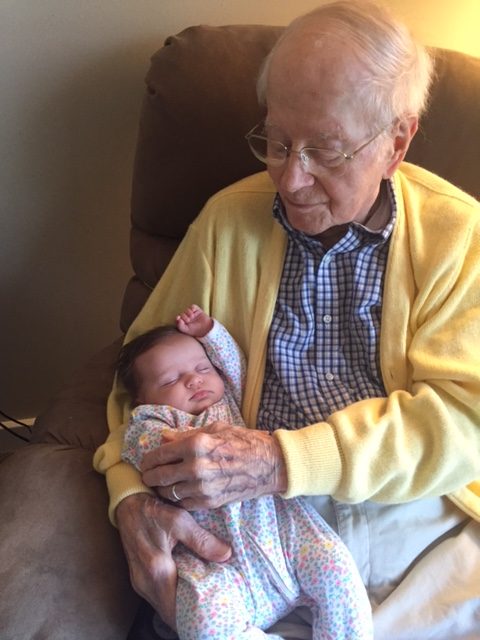 What impresses me most about Jackson is his continued dedication to the community that raised him. I started following his story in 2007, and this belief that no one should be left behind is rare and admirable.

He has never forgotten his roots. As a retired social worker, I know that in order for a community to thrive, they need access to education and safe housing regardless of where they live in the world. I love that Nyaka agrees, and that this shows through the values the organization espouses.

I am now 99 years old and have decided to name Nyaka in my will. I made this decision because I know this organization is on the right track and has the potential to continue transforming the lives of many. I hope my gift will help for many years to come, and I encourage others to join me in making sure Nyaka is around for a long, long time! 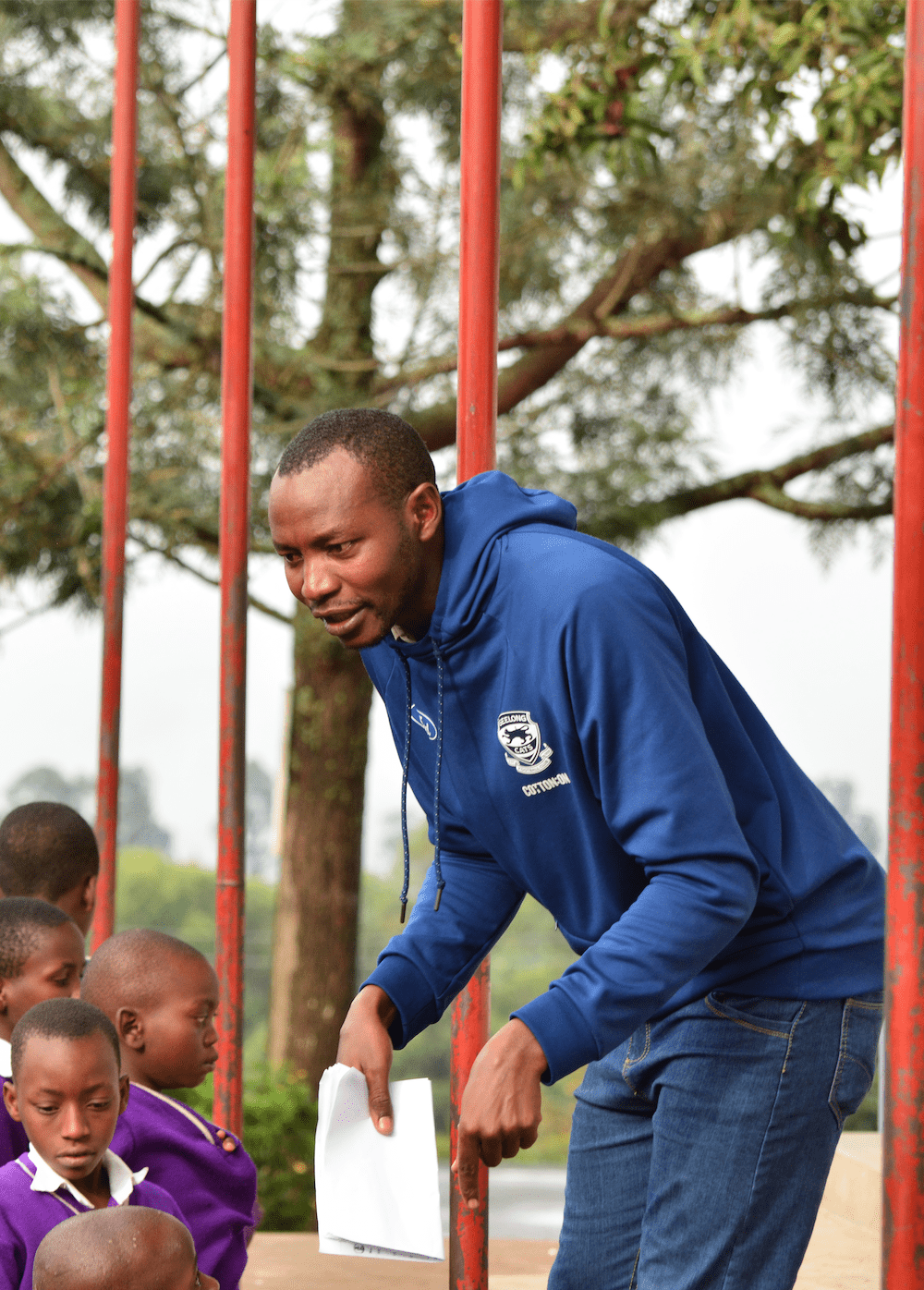 I was very young when I learned the importance of physical fitness. I lost my dad when I was in primary 1 and my mom had to work very hard to raise me and my younger brother, to ensure we could afford to go to school.

When I was in primary 4, I had a teacher who saw a talent in me. He encouraged me to work on my fitness and to pursue sports. A secondary school saw me play and offered to sponsor me to run and play soccer. This way, I could attend without paying any school fees. Since our director was running the New York City Marathon to raise money for Nyaka, we decided to run our own race, here in Nyakagyezi to raise money for Kambuga Hospital. I was put in charge of organizing as I know Nyaka so well and I myself have run many marathons. I wanted to use this opportunity to show people how to give back to the community. Many others helped me leading up to the race and on the day of the race because they believed in the cause.

I always tell people that being a nurse is more of a calling than a profession — I really feel that it is an invitation from God to serve His people. I’ve been working for Nyaka for five years now at the Mummy Drayton Clinic.

I’m from Kanungu and have two children — one is in primary 1 at Nyaka Primary school and the other is just a baby. My husband is also a nurse; we met at school. I hope that my daughters will follow in our footsteps and work as medical professionals also. We need people to train as nurses and doctors to help heal our communities. It’s not easy but when I speak with my children and other young people I remind them to really think about the long-term benefits you receive from education. Education is essential to building yourself up and to bettering your community. 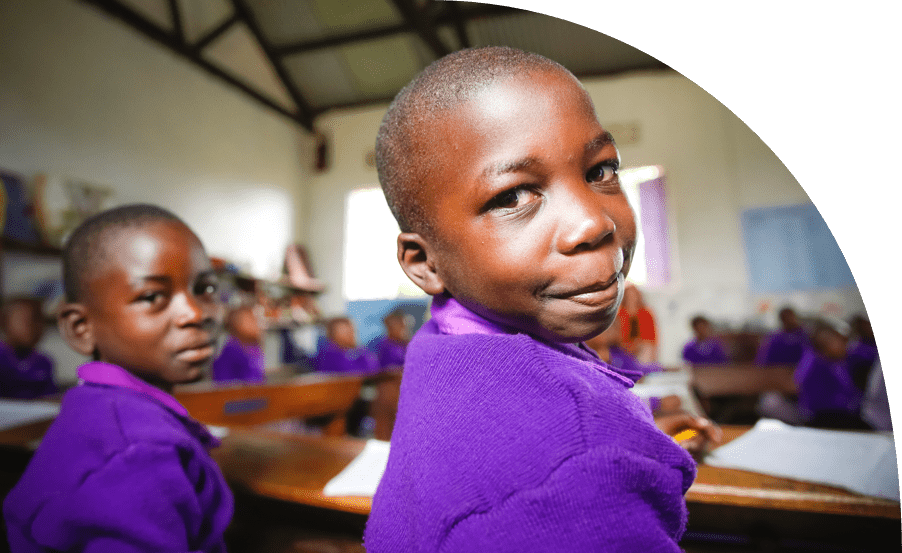 Our children look to you to keep them healthy, strong, and safe.

Mission statement
Nyaka UK is working to give funding and support to NGOs working with orphaned, abandoned, often vulnerable children and the grandmothers who care for them in southwest Uganda, with an initial focus on Nyaka AIDS Orphans Project.

Registered with the Charities Commission in England and Wales.
Charity number 1191658